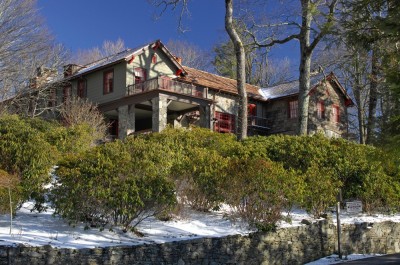 The Return of Miramichi: Mark Kirkpatrick's Mountain Construction Enterprises Is Restoring One of Western N.C.'s Most Famous Landmark Homes

If Joseph and Annie Cannon were still alive and wanted to fix up their home, Mark Kirkpatrick would definitely be the first person they contacted, and there would be no further need to look elsewhere. 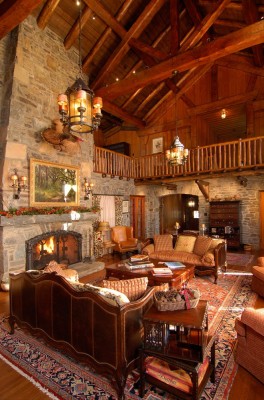 Joseph and Annie completed "Miramichi" (happy retreat) in 1927, long before Mark Kirkpatrick was born. Sadly, Joseph died while his home, anchored into the rugged hillside that overlooks the John's River Valley to the southwest, was still comparatively new, however, his devoted wife, Annie Ludlow Cannon would continue to call her magnificent mansion in the mountains home until her death in 1965. Yet today, close to five decades since she lived there, Miramichi remains, not one of, but the most prominent of Blowing Rock's historical seasonal homes still in private hands.

Over the past few decades, Miramichi has been left to time and the elements, with the once-famous residence that welcomed strangers and friends alike to a host of special events from "singins" to "prayins" and from the world famous to the school children of the village, stood empty--left much as it was when Mrs. Cannon died.

Eventually, the historic home was placed on the market and today its new owners don't even want to hear any discussion about its being remodeled. "Restoration" is the word Mark Kirkpatrick uses now to describe what his Mountain Construction Enterprises is doing at Miramichi. "When I first met the new owners it didn't take long for me to clearly understand they had no interest in a remodel. Their intent was restoration of the home to its original grandeur."

Those in the High Country who know the type and quality work Kirkpatrick does, don't question the owner's 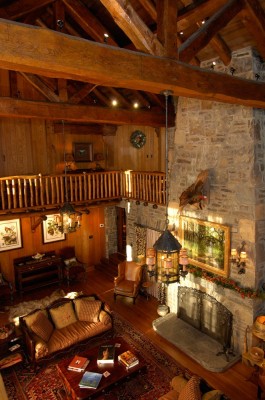 decision in selecting him for the restoration project.

Kirkpatrick says that if ever a historical building was so strongly and soundly built to withstand restoration eighty years after it was built, it would be the Miramichi. "The workmanship and structural integrity of this building is phenomenal," Kirkpatrick says. "The only reason we're having to spend so much effort now in restoration is because it sits as a breaker for every storm that comes up out of the gorge, and the years have taken their toll on the superficial elements. Basically," he says, however, that "the guts of the building are as sound as the day they were built."

Kirkpatrick has assembled a group of highly skilled craftsmen who won't compromise any modern fixture or workmanship if it detracts from what was there when the house was turned over to its new owners in 1927.

"I'm convinced that the new owners are as intent on doing this for the preservation of the history of the village as they are for their own personal lifestyle," Kirkpatrick says. "I look at this job as an honor with a lot of responsibility--probably more historical than physical. We all feel that we are saving part of the soul, part of the history of Blowing Rock."

Looking at Miramichi today is like looking through a maze of overgrown gardens, scaffolding, wires, lumber, shingles, equipment and manpower. It's hard to see the Miramichi of old, but it's there, there amid all that mass of resources needed to bring life back into a once great treasure.

The return of Miramichi is at hand, and soon it will stand as proudly as it did eighty years ago, a tribute to the family that built it, a landmark memory of the lifestyle of another era, and a continuing story whose ending is yet to be written.

Read more about this home.